THE MIRROR - an improvisation format for two professionals and up to 100 amateurs. Designed by David Shepherd.

an improvisation format for two professionals and up to 100 amateurs

The Mirror is advertised as a place where you create a show simply by sitting in front of a mirror.  To do this we use no written material, no satirical distortion, no symbolic magnification. The experiences we explore each night are shared experiences - common to most of those present.

When people arrive at the theatre, the first thing they see is their names and themes on a program, that's been printed only minutes before.  Next they see their reflections - in glass or Mylar.  In the improvisations that follow they see their own life - mirrored first by professional players and then by their peers in the audience.

If management can afford a videotape recorder and projector, the spectator can even have the experience of seeing a full-size mirror-image of himself.

Gathering a relevant body of themes and an audience:
A performance of The Mirror starts hours before curtain time - when apprentices pick up suggestions for the show from restaurants, hotels and offices around the theatre. These suggestions have been written on place mats and table tents designed to involve people in choosing the content of the show.
Door prizes or cash awards are offered to those willing to play out a suggestion.  Consequently we get fewer challenges and spoofs, and more thoughtful themes.  On the back of the place mat are printed creative games that can be played over supper to isolate a theme. (Naturally these place mats can be taken home to remind potential customers of our address, and to stimulate word-of-mouth.)
The apprentices who pick up suggestions do not do it routinely.  They find out if the person who's made the suggestion plans to come to the show.  If so, they sit for a minute at his table to see if he's willing or able to direct the action - or play into it.  They prepare the customer for what will happen so that The Mirror can reflect the maximum creativity of the group that will come together at show time.
The apprentice is in face a talent scout searching for people who can illuminate roles, and roles that can illuminate people.
Preparing scenario card decks:
Information gathered by apprentices is woven by the professional staff of The Mirror into scenarios.  The flood of themes is channeled under recurrent stories.  These stories can be expressed in the same "master" scenarios, for instance: "Boy meets girl," "Boy loses girl," "Boy gets girl back again."
The professional players also choose a few sound and lighting effects that can enrich the scenario.  They know that the oldest scenario is bound to come out differently every time it's done because critical details will shift.  The lovers will have different jobs, different ages, different origins.  Their story will be played out by different players against different activities or backgrounds.
Each event in the scenario is stated on a card large enough so everyone in the audience can read it under a spotlight during the blackout.  A complete scenario might include a dozen cards, arranged in a time sequence.  It's the audience that chooses where to start in the sequence and how fast to go through it.
Each improvised scene is kept short and is framed by blackouts.  Each theme can be explored in about fifteen minutes.  A show consists of about three themes - plus the warmups that prepare audience members to direct and play into improvisations.
The role of the professional:
Professional players are limited to one man and one woman - in order to assure the audience of opportunities to intervene in many ways.  The professionals promise the amateurs in advance that no one will be forced to play,  but everyone will be asked to vote on which theme to explore first, and on whom to cast.
First: a few minutes of warmups.  Next: two pools of volunteers emerge - one of directors and one of players.  The second pool is spotlighted so that the audience can at all times see its cast options.  At any moment it can vote to replace a player, and some scenes may be done several times with several casts - until the audience is satisfied.
Naturally, if no one volunteers to play, the two professionals will play out the whole scenario by themselves - snatching hand props and costume pieces to double as the various characters called for.  But this never happens.
The audience soon finds itself adding sound effects and off-stage voices to enrich the action.  Directors in the directing pool stop action and change a factor - such as the emotion or activity of a character.  And from the acting pool real people provide real alternative to the strict limitation of one professional actor and one professional actress.
By the end of the evening these pro's have usually left the stage to direct, or have limited their roles to "one-liners" or silent "cross overs."  The Mirror has happened: by simply sitting in front of the stage, the audience has created its own show.
Prizes:
Part of each night's income is retained to reward volunteer players.  These prizes are not intended to make for a TV game show competition.  They are offered to promote audiences, to validate audience talent, to enlarge the pool of volunteers and to decrease the gap between the amateur and the professional. 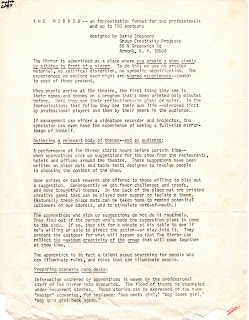 Michael Golding is a writer, director and improv teacher. He is a founding member of the Improv Olympics and the Canadian Improv Games.  Michael created the Insight Theatre Company for Planned Parenthood, Ottawa and the Comic Strip Improv Group in New York.  He co-produced and wrote the documentary "David Shepherd: A Lifetime of Improvisational Theatre" (available on YouTube) and his book, "Listen Harder," is available on Amazon.  Michael is a faculty member at Compton College in Los Angeles, where he works with traditional and at-risk students. He holds a BFA degree in drama from New York University's Tisch School of the Arts and an MA degree in education theatre from NYU's Steinhardt School of Culture, Education and Human Development. He can be contacted at migaluch@yahoo.com.
Posted by Michael Golding at 11:18 AM