It's All About The Where by Michael Golding

I recently conducted a teacher training workshop at an improv festival, where most of the participants were unfamiliar with the work of Viola Spolin, the mother of improvisation.  This is not uncommon.  However, in a discussion about the choice of games the teachers use in their workshops, most were Spolin based. They just learned them under different names. Also not uncommon. I recommended Viola’s book “Improvisation for the Theater” as an essential resource and for re-indoctrination.


David Shepherd also attended the festival, where he quickly became known as “the ancient one.”  In 1955 David created Compass, the first professional improv theatre in North America with Paul Sills, Viola Spolin’s son. Sixteen years later, David created the Improv Olympics with Howard Jerome, a format that was designed as a loving celebration of Viola’s work. David is a Spolin purist and when he brought the Improv Olympics to Chicago in 1981 it came with a letter of understanding for the players acknowledging Spolin’s games as the inspiration for the format. 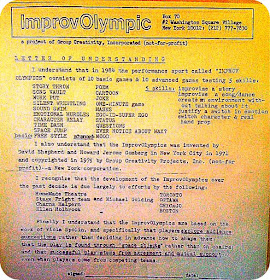 An impromptu forum was arranged for David, which I moderated for the staff and volunteers of the festival.  During the forum David was asked what he considered to be the most important aspect of improv.  David replied “It’s all about the where!”  The audience smiled, but there was no follow up question and silence followed. Since many in the audience were seasoned improvisers, I didn’t want to insult anyone by asking “You all know what the where is, right?” It‘s possible that they were intimated by being in David’s presence and were waiting to see if he was going to add anything.


I asked David if I could elaborate further and he replied enthusiastically “of course!” Sharing knowledge that David bestowed upon me 45 years ago, I presented a 30 second overview of the where; “The where, which is also called the location, setting or environment, is created by constantly discovering details. Through those details, you connect with how you feel, which is expressed through the use of imaginary objects and activity which become more realistic when endowed with qualities (temperature, texture, weight). The where connects you with other players and keeps you in the moment.” Smiling, David turns to the audience and says “This is a very smart man!”

As the result of preparing David Shepherd’s improv archives for delivery to Northwestern University, I’ve been able to monitor the evolution of David’s formats. My first exposure to improv was on David’s Responsive Scene radio show, where the who/what/where scene structure was set up as; WHO is in the scene? WHAT is the scene about? WHERE does the scene take place?  Once I started playing in the Improv Olympics the WHAT was changed to WHAT are you DOING? In the Responsive Scene the WHAT was story based. In the Improv Olympics, it was activity based.

That shift solidified my focus in a scene. I already knew who I was, what I was doing activity wise, and I had a where to explore. Everything that followed story wise was based on the here and now and built on the foundation of collaborating with my fellow players through agreement.

I teach my students to enter scenes with a strong activity, which helps in the exploration of the where. Surprisingly, I have to provide them with examples of what an activity is. Most of them come up with passive choices – watching TV, texting, reading. When I ask for suggestions for an activity that two people can do together I get fighting, sleeping and intercourse.


As I slowly transition into old school improv dude who screams at the millenniums to get off his mainstage grass I’m developing a few crotchety impressions of the next generation of improvisers. Not all the necessary improv skills are utilized on stage. A lot of talking. Not much exploration of the where.  On Facebook improv pages  the work tends to be over analyzed.  I found this skill page from one of David Shepherd’s training manuals. For me, it’s all there. Nine simple sentences. Wisdom from the ancient one.

Michael Golding is a writer, director and improv teacher.  He can be contacted for workshops, festivals and private consultations at migaluch@yahoo.com. Michael participated in the evolution of the Improv Olympics & Canadian Improv Games. Artistic director of the Comic Strip Improv Group in N.Y. & created the Insight Theatre Company for Planned Parenthood, Ottawa.  He is a faculty member at El Camino College in Los Angeles, working with at-risk teens and traditional students. He wrote and co-produced the documentary "David Shepherd: A Lifetime of Improvisational Theatre" (available for free on YouTube).  His book, Listen Harder, a collection of essays, curriculum and memorabilia on improvisation and educational theatre, is available on Amazon, Barnes & Noble and CreateSpace. Michael holds a BFA degree in Drama from New York University’s Tisch School of the Arts & an MA degree in Educational Theatre from NYU’s Steinhardt School of Culture, Education & Human Development.